More than 1,100 decision-makers of the Iranian textile and carpet industry as well as 36 leading German textile machinery and accessories manufacturers participated in the VDMA textile machinery conference from 21st to 22nd April in Tehran. In the light of this high number of participants and the intensity of the discussions regarding concrete intentions for investment this has been the most successful conference of the VDMA Textile Machinery Association for more than 10 years. The meeting will boost demand for “German Technology” by the Iranian customers.

In 2014 already, the German textile machinery exports to Iran increased to 37 million Euros. Nevertheless competition became stronger over recent years, such as from China. Thomas Waldmann, Managing Director of the VDMA Textile Machinery Association, explained in this context: “We now see the chance to regain lost market shares. The longer customers are not in a position to buy German machinery due to the punishment, the more new business becomes challenging. For this reason we took the informed decision in 2014 to hold the symposium in Iran, despite the political uncertainty. Our expectations have been greatly exceeded.”

The excellent timing and the fact that the symposium has been the first German event of this magnitude in Iran for more than 10 years, have also contributed to the huge response. The strong demand of the visitors already became apparent in the run-up of the event. Boris Abadjieff, Head of Exhibitions and Marketing of Textile Machinery Association: “For the first time we have been forced to close general registration a good month before the conference for reasons of capacity and safety.” This great feedback as well clearly shows the enormous backlog in investments, the thirst of knowledge of the Iranian textile and carpet manufacturers and the excellent reputation of German technology in Iran.

During the opening of the conference Mrs Golnar Nasrollahi (General Manager of Textile & Garment Department, Ministry of Industry) underlined the importance of the after sales service of German machinery manufacturers in Iran and the ambitious target of the government to promote the export of the textile industry, which today is strongly concentrated on the domestic market. The Iranian textile, carpet and apparel industry employs about 1 million people and exports at present textiles and carpets worth 1 billion US Dollars per year. This sum shall increase to 2 billion US Dollars in the forthcoming years. The German Ambassador, Mr Michael von Ungern-Sternberg and the Chairperson of the VDMA Textile Machinery Association and Managing Associate of Brückner Trockentechnik GmbH & Co. KG, Mrs Regina Brückner, also participated in the opening ceremony.

During the conference Mrs Brückner stated: “The decision-makers of the textile and carpet industry have followed the technical lectures and the innovations with enthusiasm. They are urgently looking for potentials to optimize their most times old equipment. Many of the machines originate from closed or insolvent companies of the most different – most times European – countries. Even the supply of spare parts for the existing equipment is very difficult as many of them are considered as dual-use parts, though they are required unambiguously for repair of the old machines.”

Beside the lectures, the visitors particularly made use of the B2B matchmaking area to enter directly into conversation with the German company representatives and to discuss intensively their concrete project ideas. Mrs Brückner: “Concrete inquiries for new machinery and for latest technologies have been made”. Several German companies made “Energy Efficiency” of their equipment the main focus of their presentation.

Perspectives for the German textile machinery manufacturers are good. Iranian investments mainly focussed on spinning technology in the past, but both customers and the Ministry of Industry have understood that the value of the final textile products can be increased considerably by additional manufacturing steps, which would open chances for additional employment and higher export values. After the event, many of the attending company representatives see a clearly higher potential in Iran than before. Many companies, however, will remain busy to find a solution for handling payment flows. Even the bankers themselves are extremely reserved with handling simple transfers from Iran. Handling letters of credits remains nearly impossible. VDMA (German Engineering Federation) therefore requests that the banks come back to the legal Iran business in order to support the medium-sized companies. 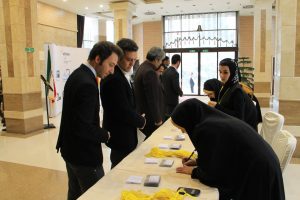 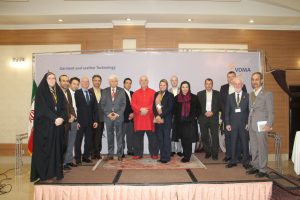 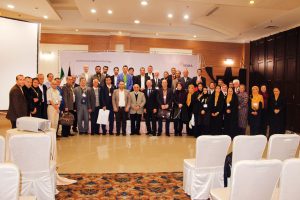 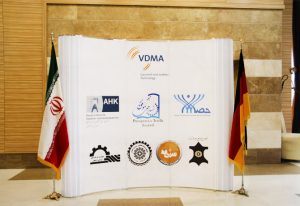 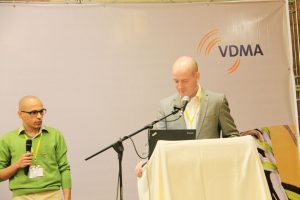 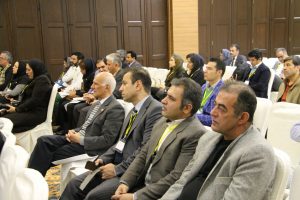 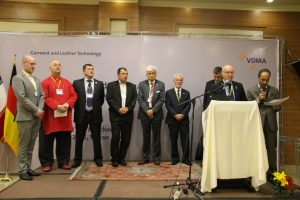 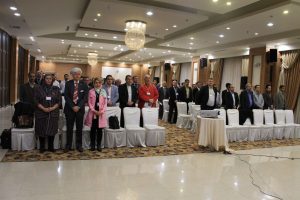 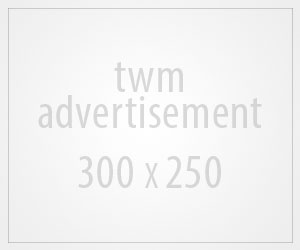 Your path to straight fabric… There is no excuse for distortions!